Teamwork takes on a new meaning when it’s just you and your partner skimming across the water at 30 knots on the Nacra 17’s tiny hydrofoils. There’s little time for verbal communication, so every move must be perfectly choreographed. And mistakes can be costly. You have to know what your partner will do before he or she does it. But that wasn’t the sort of teamwork that Louise Chafee (Warwick, R.I.) was praising after she and skipper Bora Gulari (Detroit, Mich.) won the day, with 13 points across three races on Day 4 of the 2019 Hempel World Cup Series Miami, and qualified for tomorrow’s double-points Medal Race. She was instead referring to the genuine partnership that exists between the handful of American teams competing in the class. Only one of them will qualify for the 2020 Olympics in Tokyo in 18 months time. But for any American team to go there with a hope at a medal, they must all work together to lift their collective game. Sarah Newberry and David Liebenberg (Livermore, Calif.) will join Gulari and Chafee in the Medal Race, which will be aired live along with the four other Medal Races scheduled for tomorrow via the Olympic Channel app and OlympicChannel.com online streaming platform.

“What’s really cool is we’ve been working really hard as a squad,” said Chafee. “Traditionally, with the American teams, it’s been every team for itself. What the Nacra teams have been doing a very good job with, with our coach Mike [Ingham], is we’ve been working together. There are no secrets. Anything we learn, we share with the teams in the debriefs. That way we’re all getting better together.

Chafee knows first-hand the level required to win an Olympic medal. She and Gulari sailed together at the Rio 2016 Games, finishing eighth. They each competed with different partners for the first half of the quad before reuniting this fall. An intense training block, which started in November, has put them back in the hunt. But they struggled out of the gate in Miami. They closed out yesterday with a win and were at the sharp end of the fleet all day today, in conditions that flummoxed even the defending gold and silver medalists in the class.

“We’re definitely trending upward, which is awesome,” said Chafee. “Bora and I haven’t sailed together in a few years now. We’re just getting back into the racing swing of things together, getting in sync. The nerves have calmed down a little bit, the anxiety, we’re taking some deep breaths and make sure that we’re doing the right things right and not making that second mistake, which is always the killer.”

Chafee explained that in the Nacra class—if not in all the Olympic classes—mistakes happen. No one is immune.

“You’re just thinking, ‘OK we made one mistake,’ and we’ve got to look for our next moment,” said Chafee. “Where do we go from here? If our plan is to go right and we made the mistake of getting shut out at the start, for example, do we re-valuate our plan and say we want to go left ,or do we say oh no, we still want to go right, we made a mistake in our start, but we’re going to duck these boats and go right.”

In terms of the overall results, there isn’t a lot of opportunity to move up for either American team in the Medal Race. But there’s a lot of time until the 2020 Tokyo Olympics and the U.S. team is moving, as a group, in the right direction. Ravi Parent (Sarasota, Fla.) and Caroline Atwood closed the regatta with a second and moved into 13th overall while Riley Gibbs (Long Beach, Calif.) and Anna Weis were 15th. No other country had more than two teams in the top 15.

“You look at the top teams, New Zealand, Australia, Italy, they all consistently have multiple boats in the top 10,” said Chafee. “They’re all working together. To see America do that and have two teams into the top 10 for this event. That’s awesome. I’m really psyched for the squad and our own personal team.” 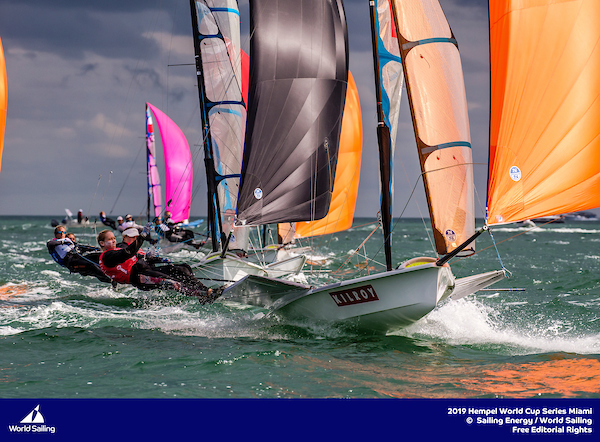 Only one other U.S. team will sail in tomorrow’s Medal Races. Stephanie Roble (East Troy, Wis.) and Margaret Shea (Wilmette, Ill.) were unable to keep up the pace that had them leading the regatta at one point. But they pulled out an eighth place in today’s final race and move into ninth overall. They have a decent shot at moving up one space during tomorrow’s race. Paris Henken (Coronado, Calif.) and Anna Tobias were the second-placed American team in 17th.

No fleet saw more movement at the top of the standings than the 49er fleet. Two American teams were, at one time or another, inside the top 10. But when the dust settled after two races today, neither qualified. Ian Barrows (St. Thomas, U.S.V.I.) and Mitchell Kiss (Holland, Mich.,) led the American squad in 14th. Nevin Snow (San Diego, Calif.) and Mac Agnese (Fort Lauderdale, Fla.) were 19th.

In the RS:X classes Farrah Hall (Annapolis, Md.) and Pedro Pascual were the top American finishers in 27th and 37th, respectively.

Among the fleets that will finish their full-fleet races tomorrow in preparation for Sunday’s Medal Races, the news was better.

Paige Railey (Clearwater, Fla.), dominated the Laser Radial class with a fifth and two firsts. With eight races down and two more tomorrow, she has a nine-point lead over second place. Erika Reineke (Fort Lauderdale, Fla.) is 12th and just one point out of 10th. 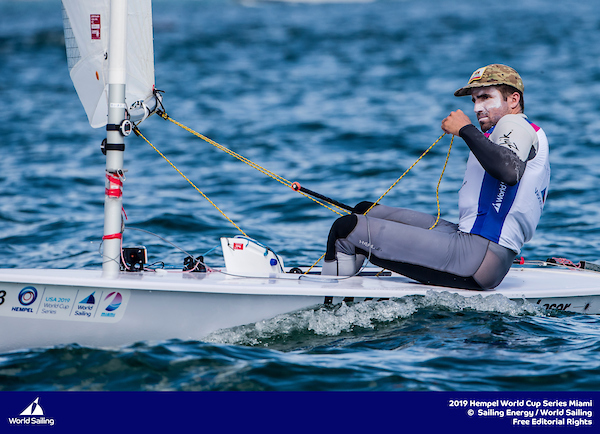 Charlie Buckingham’s (Newport Beach, Calif.) consistency in the Laser fleet has him in fourth, one point out of third and 19 points out of silver. Hermann Tomasgaard (NOR) has dominated this regatta in a way not often seen. He has just 21 points through nine races. Chris Barnard (Newport Beach, Calif.) is 11th and in striking distance of the top five.

Caleb Paine (San Diego, Calif.) broke through for a win in the second Finn race today. But he still has a bit of work to do to make the Medal Race. Luke Muller (Fort Pierce, Fla.) is in a very strong position, sitting sixth with up to three races tomorrow, though the top half of this class is very tightly packed.

The Men’s 470 class has two teams in the top 10, Stu McNay (Providence, R.I.) and David Hughes (Miami, Fla.) are seventh while Lucas Calabrese and Jack Parkin are 10th. With just six races finished and up to three scheduled for tomorrow, there’s the potential for a lot of movement at the top of the standings.

In the Women’s 470 class, Atlantic and Nora Brugman are currently seventh, but will need to hold off a host of strong teams to make the Medal Race on Sunday.

49er, 49erFX, Nacra 17 and the RS:X windsurfer Medal Races will be live across World Sailing’s YouTube and Facebook from 12:00 local time on Saturday 2 February. Fleet racing for the remaining fleets starts at 10:30 local time.