Super Sunday was exactly that for two members of the U.S. Sailing Team. Paige Railey (Clearwater, Fla.) and Luke Muller (Fort Pierce, Fla.) stood on the podium earlier today to accept a silver and bronze medal, respectively, for their performances in the 2019 Hempel World Cup Series Miami, a crucial milestone on the road to the Tokyo 2020 Olympics.

The medals were the brightest reward from the day’s sailing for U.S. sailors, but there were positive takeaways throughout the five medal races on the final day of competition at the 2019 Hempel World Cup Series Miami, which celebrated 30 years of Olympic-class yachting on Biscayne Bay. All told, eight American sailors participated in the final day of competition and came away with some strong individual race performances

“The team performance is way up,” said Malcolm Page, Chief of U.S. Olympic Sailing. “It’s been a lot of hard work to get here, and I remember a significant moment four or five months ago when we sat down in Aarhus [Denmark] and we realized our performance wasn’t going as well as expected—on average. We sat down with the coaches and brainstormed over what needed to be done to achieve that. Our big takeaway from that was to build confidence. We know our athletes have the talent, but they don’t always have that confidence to do it at the world championship level. We always said that 2019 had to be our year to achieve that. It’s only just begun, and we’ve had a great week. We didn’t have these results [last year], but we’re still far from our potential.”

Railey had quite a bit of ground to make up if she wanted to overtake Dongshuang Zhang (CHN) for the gold in the Laser Radial class. And while there was an equally small chance that she could lose her silver medal to Vasileia Karachaliou (GRE), Railey never thought of starting the race with a defensive strategy. 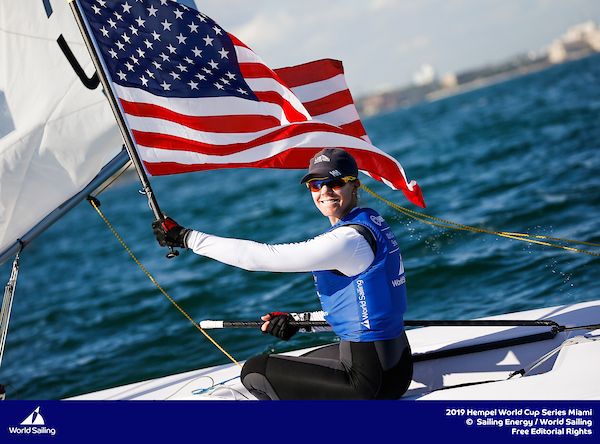 “I executed everything that I wanted to on the starting line, it’s just [Zhang] is so much faster than I am in the light air,” said Railey. “Unfortunately my speed did not benefit after I did the maneuvers that I wanted to.”

Zhang was quickly able to gain the upper hand and once she did, as Railey was the only person who could potentially steal the gold medal, Zhang merely had to keep Railey pinned toward the back of the fleet, which she did for the rest of the race, finishing ninth to Railey’s 10th.

“You go for it in the beginning,” said Railey. “I’d rather try than not try at all.”

Railey won three races and finished second in another. But she also had some deep races. Her silver medal, she said, is a testament to perseverance.

“It just shows me that you have to keep plugging away every single race,” said Railey. “All the girls, actually the medalists, we had some pretty deep races, black flags [for starting early], 20s, 30s. What it shows is if you just keep going one race after another and not focusing on the end results, you can come back from a deep result.”

Railey has been racing at the top of the Laser Radial fleet for more than 15 years. She won the class’s world championship in 2005. Every year brings a new crop of hungry, young sailors who are constantly improving how the ubiquitous dinghy is sailed.

“Everything keeps evolving and changing; I just keep trying to learn new things,” she said. “As the game progresses, I need to stay up to date so when the girls bring new things to the table, I force myself to learn how to do it. Also I never stop believing in myself.”

Belief in one’s self was also a central theme to Luke Muller’s roller-coaster race in the Finn class. Medal Races don’t usually have more than one act. But Muller’s Medal Race was every bit a three-act drama en route to a bronze medal, his first in a Hempel World Cup Series event and his best international performance in the men’s heavyweight dinghy. 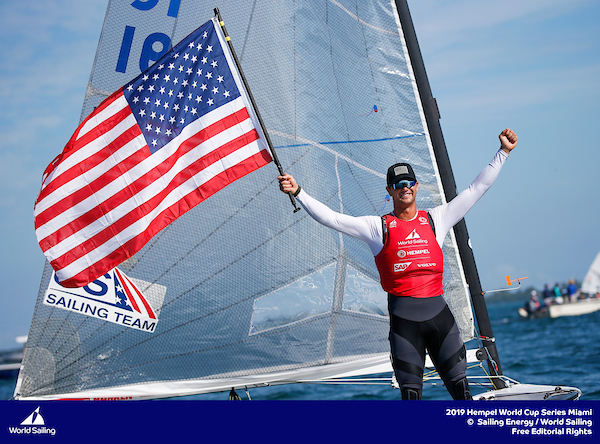 “I liked the pressure on the right side and so I set up really close to the boat at about three minutes and just tried to start with all the boatspeed that I could,” said Muller. “I think I did a good job of that. Unfortunately halfway up the upwind I was flagged for [pumping] and I took my penalty turn and actually did an extra one. I’ve only been in three medal races and I’d read [the rules] this morning, but just wanted to make sure, 100 percent, and did my best to rely on my boatspeed to get back in.”

Muller was last around the windward mark and eighth around the leeward mark. But in the light and shifty conditions that have prevailed in Miami this week, there’s always a passing lane or two that can be found. On the second beat he bounced up to fourth and then held off Max Salminen, who would win gold, on the final two legs to ensure a bronze medal.

“It means a lot,” he said of the medal. “Then again, it’s one regatta and we had pretty much one type of conditions and I’m pretty good at [those conditions]. I know that I have a lot of weaknesses and a lot to work on, and I’m striving and determined to keep going and keep that up. It’s definitely a great step and I’m grateful for my team with Luther [Carpenter, U.S. Finn coach] and Caleb Paine and just hoping to go up from here.” 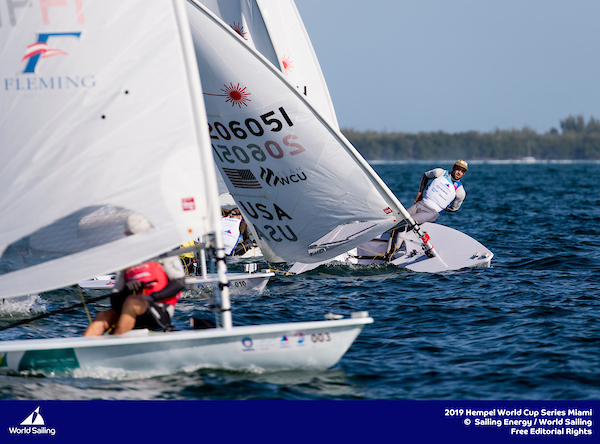 Other standout performances in the Medal Race came from Stu McNay (Providence, R.I.) and David Hughes (Miami, Fla.) who won the Men’s 470 Medal Race and jumped up to fourth and Charlie Buckingham (Newport Beach, Calif.) who finished second in the Laser Medal Race and likewise moved up to fourth. Both teams entered the Medal Race with an outside shot at bronze, but would’ve required help from other competitors to reach the podium.

Atlantic and Nora Brugman qualified for a Medal Race for the second time in their careers and finished sixth in the Medal Race and eighth overall. Erika Reineke (Fort Lauderdale, Fla.) continued her upward trend over the last few days of the regatta, finishing the Medal Race in fourth and the regatta in sixth.

Olympic sailing has become a fixture on Biscayne Bay over the past 30 years. Page hopes that will continue for another 30 years or more.

“This is a significant event for the United States,” said Page. “It’s one of four Hempel World Cup Series event that happen around the world, the only one in the Americas. It’s hugely advantageous to have this our backyard. We call the U.S. Sailing Center Miami our home. To have international athletes coming to train in our backyard is hugely cost effective. The next generation know about this event, and they can come compete in this event if they’re lucky enough to get an entry. They can come measure themselves against the world’s best. This allows them to get a taste of where the level is. I think it’s an integral part of sailing within the U.S.”